For other uses of the term Intersect, see The Intersect. 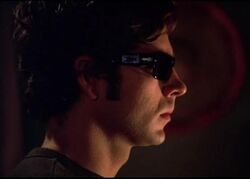 Intersect Glasses are glasses that contain a portion of if not complete files for the Intersect.

In the Season Two episode "Chuck Versus the Break-Up", the Intersect glasses were first seen and used to send an update for the Intersect in Chuck's brain. The glasses were left inside Chuck's bedroom, courtesy of Bryce Larkin, they were ID aligned, programmed to download for Chuck only upon activation.

Apparently Bryce took it upon himself to update Chuck with these glasses as there is no mention of Sarah, Casey or Beckman knowing about the update. It could be said that Bryce had been working alongside Orion for awhile as they seem to have a relationship in "Chuck Versus the Ring". Further evidence that these glasses may not have been government issue is that, unlike all other Intersect Glasses featured in the show, these glasses needed the subject to be identified before being uploaded.

In the Season Three episode "Chuck Versus the Nacho Sampler" it was revealed that the Ring was attempting to reverse-engineer the Intersect from damaged components of Intersect 2.0 they stole from the CIA after its destruction.

As part of this effort, they contracted a software engineer, Manoosh Depark, to develop a new Intersect. The results of the project were a pair of sunglasses that could upload Intersect 2.0 skills to the wearer. Unlike the full Intersect, the portable version did not download into an agent's brain and was entirely self-contained within the device. The extent of its capabilities are unknown, as the only flashes they have been seen to produce are on martial arts. The images during flashes were also grainier and not as clean as Chuck's. Manoosh ultimately destroyed his glasses when cornered by the Ring, hoping that without a functional prototype, the Ring agents he was attempting to cheat would consider him too valuable to kill.

The glasses appeared once more in the Season Four finale. Two weeks after Team Bartowski had been fired when Chuck went rogue to save Sarah, Clyde Decker intentionally left behind a pair of sunglasses containing a corrupt copy of the Intersect 2.0, but it was Morgan who put on the glasses and accidentally downloaded the Intersect into his brain.

This made him the new and only human Intersect on the now freelance Team Bartowski, after Chuck's Intersect had been suppressed. This new Intersect contained a Trojan Horse, which caused memory loss for for Morgan. The Trojan Horse altered Morgan's personality, making him more overconfident and arrogant, so much so that he dumped Alex via text. Chuck said he was becoming 7th grade Morgan all over again.  Chuck had to remind him who he really was to break him out of the arrogant alter ego.

In Chuck Versus Bo, it is revealed that while corrupted by the Intersect, Morgan came across another pair of Intersect Glasses in Vail containing a copy of the Intersect 2.0 acquired by Nicholas Quinn who orchestrated Morgan's capture in order to verify the claims of the Intersect having side effects (as Morgan's did). Upon deeming Morgan healthy he decided to knock him out as there would be nothing for him to worry about. As he sprayed the X-13 knockout gas, Morgan 'zoomed', breaking out of his restraints, knocking out everyone in the room including Bo Derek before escaping with the glasses and hiding them in a video game display vault in the Vail Buy More.

Once the glasses are in the custody of freelance Team Bartowski, Chuck is captured by Quinn, who orders Sarah to bring the glasses to the San Pedro pier. Once Sarah and Casey arrive they realize it was a setup and are surrounded with Quinn's men demanding she hand over the glasses without giving her Chuck. Casey opens fire, allowing Sarah to hide, but they both soon realize they are running out of ammunition and are badly outnumbered. Seeing it as the only option, Sarah puts on the glasses and uploads the Intersect, thereby taking out all the enemy.

In Chuck Versus the Bullet Train it is shown that Sarah's Intersect is the exact same copy as Morgan's, containing a Trojan Horse as she begins to suffer from its effects. When fighting Quinn she was unable to stop flashing when she tried, resulting in her kicking him out the train window. It was thought that it would take a much longer time for any damage to be done however it is discovered by Ellie after examining Morgan in Castle that the effects take place the more the host flashes.

Morgan started losing his memory within a month of his upload because he gradually began using the Intersect more as he went on missions while in contrast, Sarah had flashed 40 times in the space of just two days. To prevent any further damage being done Sarah was blindfolded in order to avoid any stimulation that might cause her to flash, but was already showing signs of being compromised by the program, such as not remembering who Alex was.

Upon being captured later by Quinn he used cards with special designs to stimulate flashes until she lost her memory, waking up in her apartment with him telling her that he was her CIA handler and that her next mission was to kill Chuck. Quinn had by then removed the Intersect from Sarah with a Suppression Device.

The Final version of the Intersect left in the entire world was housed at DARPA. Chuck was subtly coerced into breaking in to it and decided to  to destroy it. Instead Sarah downloaded it to glasses and attempted to deliver it to Quinn, but was thwarted by Chuck, who stole the glasses as he realized that the Sarah with him wasn't the Sarah he knew. Quinn had located a Key, developed by Stephen Bartowski that permitted re-programming and fixing corruption.

He sought the three pieces of the key (broken down by Stephen for security purposes and handed to two other people including Hartley Winterbottom). Chuck planned on using this Key to try and restore Sarah's memories by uploading her Mission Logs along with memory triggering images such as those from their Wedding Album into the Intersect,however, he was forced to use the Intersect on himself using the glasses in order to access and defuse a bomb set in the Pacific Concert Hall by Quinn in his failed attempt  to obtain the 3rd part of the key from Beckman (who had been given Stephen's part of the Key).

Apparently only Chuck and Sarah were privy to the fact that he uploaded the Intersect once again. There is no mention from any of the others regarding the Intersect, and the assumption is that Chuck, equipped with a Governor, exits the series with the Intersect.

Community content is available under CC-BY-SA unless otherwise noted.
Advertisement